Uber Statistics Through Infographics and Demographics

We can understand the importance of riding in-cab, and Uber a worldwide cab booking phenomenon came up with the idea of catching a cab through a phone in 2008 and made itself the world best cab booking app. Uber has famously changed the transportation system with its birth. Uber offers services like cab and bike booking services where you can book a cab or a bike from one place to another and in some places you can also book a bicycle and it’s based on the on-demand app development model.

This ride-sharing mobile app connects riders with drivers in just a couple of clicks and charges the rider accordingly. There’s an option to pay in cash or online. Uber has revolutionized the way we travel. It’s not only the ease of booking a cab, but it’s also a more convenient and affordable way to get around way than a traditional taxi cab. Uber has certainly played havoc with the taxi industry in major cities across the world by tearing up the rule book

Uber has many competitors playing in the same field, however, the demand and reach of Uber are much more than any of their competitors. Here we have legit Uber statistics of 2019-2020 to prove the ever-increasing popularity and demand for Uber. These Statistics will help you know what you are lacking while developing an app for you. 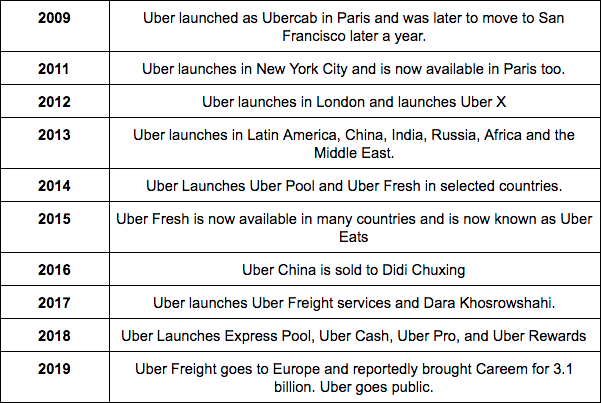 Usage of Uber’s application increased like a bush in an empty place in the past half-decade. There’s been a rise in the number of users booking Uber over their competitors while travelling from one place. It includes all types of Uber cab, bike and bicycle. 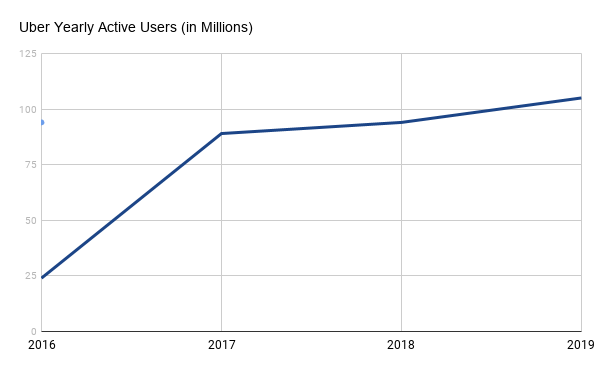 As per the Stats provided by Expanded Ramblings, the number of app users has improved drastically.

While the idea of Uber was born in Paros back in 2008, the company’s first ride took place in San Francisco. That’s where the Uber headquarters is still located today. Let us have a look at the US market share first before we analyze any international data.

Lyft is a hefty competitor of Uber in the States and has around 18.6 million active riders in the United States and Canada. Let us have a look at the Market Share of both on-demand applications through Uber and Lyft infographics. 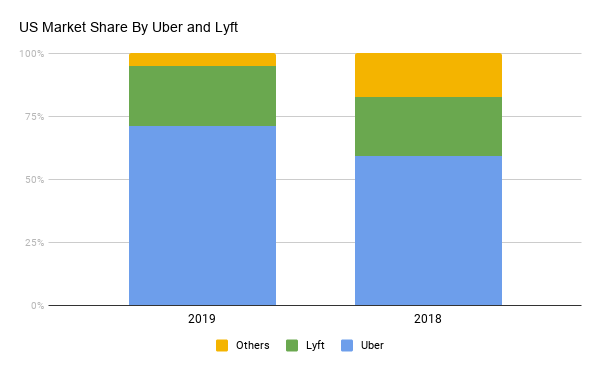 We can see that Uber controls the market and easily wins the race with a huge margin. However, Lyft has also made growth and which was 22% in 2017 is at 29% in 2019 and it shows the importance of on-demand applications in the industry and the revenues earned by them. Many reports suggest that Lyft is going to rise in the coming years but still the lion’s share is still going to Uber.

It is no news that Uber’s popularity is growing by the day. It is due to its remarkable services and products like its flawless app that enabled Uber annual revenue to reach the milestone of $11.3 billion in 2018 and 4.6 billion in 2019. There may be some fluctuations in this number in the coming years; however, the sun seems to shine on Uber’s land in the future as well.

Estimated worth of Uber

It’s been reported by BBC as of April 2019 that Uber’s estimated worth is $90 billion. This displays the expeditious yet continuous growth of Uber as a ridesharing and ride-hailing service provider.

In a report of 2018 by CNBC, the current market share of Uber is said to be between 65% and 69% as shown in the graph below. One of the biggest Uber competitors in the US, Lyft, ended up owning only 29% of market share and only 2% is estimated to belong to others. 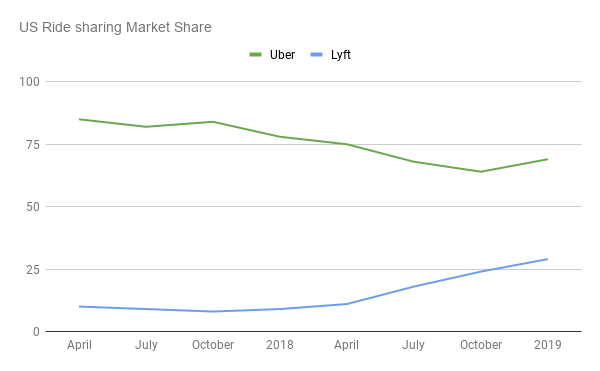 Uber has an impressive number of Riders. The reports shared by Uber, they have reached 75 million dollars and the numbers will surely increase. And Uber has 3.9 million globally.

Uber has services in 63 countries and in more than 700 cities. With coming years Uber is going to increase its reach in many countries as it has gone public in order to expand their business. 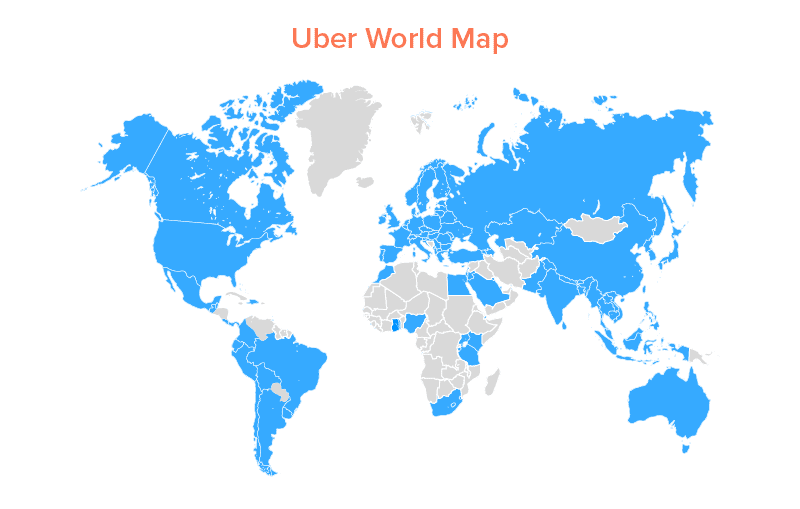 Uber was launched in India in 2013 and Ola was started in India in 2010 and has three years head start from Uber. Other competitors like Meru cabs, Jugnoo and Ixigo are also in the market and cutting Uber revenues. As per the reports published by Statista here are the infographics. 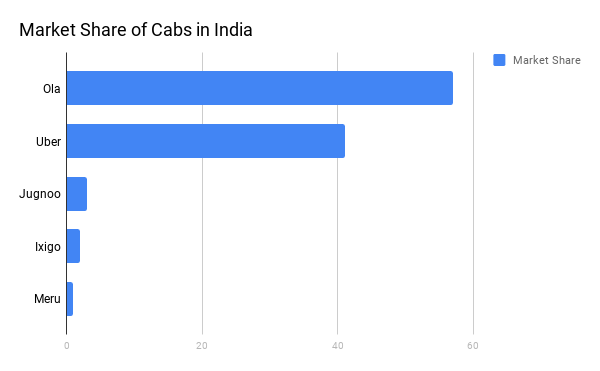 Uber’s Valuation in the World

Even though Uber is losing billions of dollars annually, the company is still valued at over $70 billion dollars. 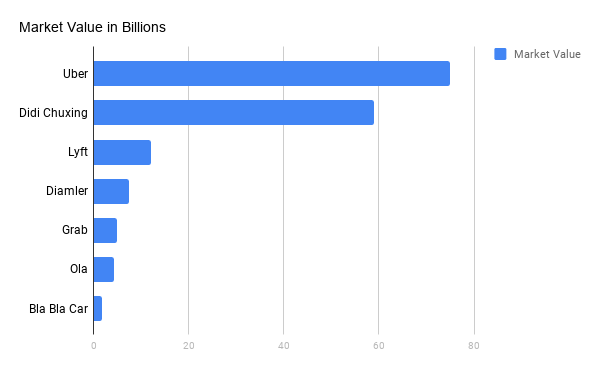 Uber’s 40 per cent workforce was Female

The number of Females has increased in the past three years. It was noted that in the year 2017, there were 36.1% of females working in the company, which in 2018 increased to 38% and is currently 40.9%. This continuous hike in the percentage is evidence of the inclusion of both genders by Uber and shows how opportunities are provided to everyone.

Uber has 42 million active users in the US and more than 95 million users Globally. And their rivals Lyft has an initial amount of 39 million. 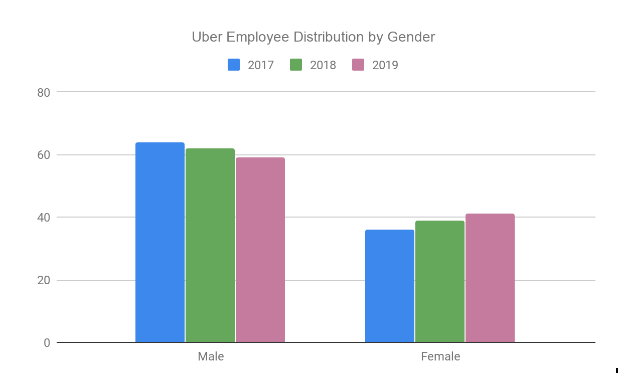 Demographic for females is 16%. Though this seems very low Uber is slowly increasing the number of female employees and making an entry for everyone. 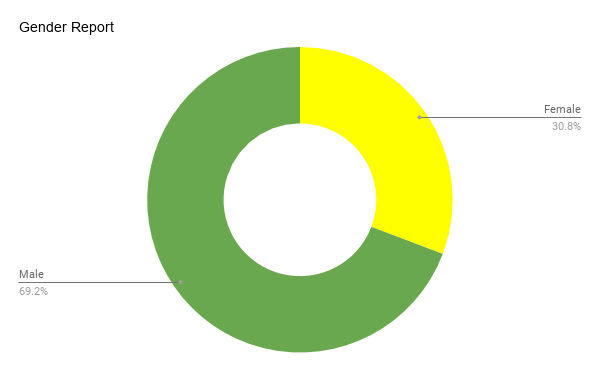 There are more than 22,000 employees at Uber and because of its popularity and its expansion, they are surely increasing the number of users.

Toyota invested around $500 million in Uber in 2018 which will help Uber in expansion around the world.

a. Leverage the potential  of Mobile period

The mobile phone users has increased a lot in the past  decade, every third person in the world has a phone and access to the internet. This means that investing in mobile app development is a great  idea with the business. The best way to bring in the customers over and over again will be offering custom features in what you do. Uber did the same and see where they stand probably in the market.

You will be able to achieve the desired ROI for your business when you hire the right mobile app development company for the job. A complete business application will be focused on increasing productivity all the while decreasing the issue faced by employees.

Any business that wants to grow needs to keep their data safe and secure while maintaining confidentiality. When you choose custom  mobile app solutions, you can be sure your data will be safe. And an application like Uber brings in the best revenue once you are established in the market.

With right on demand application you will be into the head of your audience. You will be able to have a database which brings on table information. This data can help you in your business.

Best thing about Uber is it’s services, Uber is cheap compared to its competitors. In order to be better in the market you need to offer value to the customers and stay flexible. So, it’s better to hire affordable on-demand development services.

Statistics Which Shows the Importance of On-demand Application

1. Uber has a global market value of more than 70 billion dollars.

2. Uber generated around 11 billion dollars in gross bookings in the last quarter of 2019.

3. There are more than 72 million active users across the world.

4. Uber is available in more than 80 countries

7. In only the United States, Uber completes around 40 million rides in a month.

Once you go through these Uber statistics, you will know how much acknowledged Uber is around the world. Uber is known to make the journey reliable, safe and cheap. These convenient features make Uber a world class company and that’s the reason it is adorned by the whole world.

If you wish to know about Uber like app development services then it’s the right time to invest in the on-demand applications.

Q. How many trips does Uber completes in a Day?

A. Uber  globally completes around 15 million rides per day. A massive lead in comparison to Uber’s competitors.

Q. How many drivers does Uber have in the US?

A. As the number suggests Uber has 5 million Uber drivers in the US as per in 2019.

Q. How many riders does Uber have?

A. According to some reports, there are arounnd 80 million Uber riders globally. And this number is likely to increase.

Q. How much taxes do Uber drivers pay?

Q. What cities do Uber drivers make most money in the US?

A. San Francisco, New York and San Jose are the top three cities where Uber drivers earn a huge amount.

How to Develop a Food-Ordering App like Uber Eats: Working, Features, Technology, & Cost