Talking about the music streaming industry there are many streaming apps which hit the globe. But among all of them, Spotify has seamlessly established its name among the people who love listening to music.

Spotify acts as a bridge between music and music lovers. This Sweden based media and entertainment company made its name in the world of music streaming industry. By providing Digital Music, video streaming, podcast services and millions of songs to its users across the world. It’s the service and acquisition which makes this Sweden based company rule the music streaming world.

With the expanding business statistics, Spotify has made its remark among all the other apps and makes its user more concerned about the service. Now there is nothing hidden about the statistics of Spotify. Here we are unboxing the strategies of Spotify which help it to gain more opportunities also the statistics which will help you to understand its gains more better. But before starting it let’s take a look over some facts about Spotify.

Aim and Features of Spotify

Spotify is an on-demand music streaming industry which serves the music services to its users. It is Sweden born music streaming app founded by  Daniel EK and Martin Lorentzon with the major aim to remove the content piracy and illegal distributions of recordings. They made this platform for the performers so that they can host their work and get paid for their marvellous royalties.

It’s their business model and their seamless work which takes them at the top. As they not only features the original app version but also launch the lite version for the developing countries and cosmic playlist for its user. Cosmic playlist is that playlist which lets the user select their own playlist as per their astrological sign.

The Spotify’s original version provides the user to use its services only when they log in by using their social account ID’s i.e. Facebook or the Gmail account. This makes them use their services without paying monthly subscription fees. 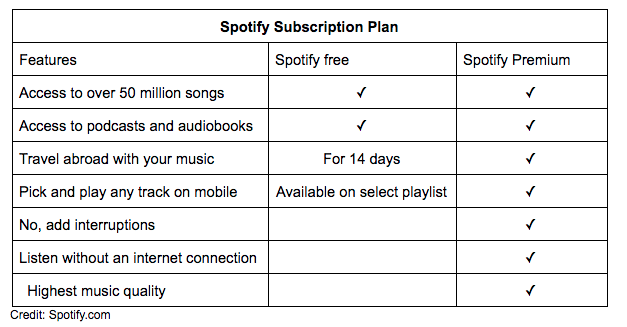 So, let’s dive into the statistics world of Spotify…

It’s the organisation acquired fact which makes it on the top. As compared to the other music streaming apps Spotify came on the top in acquiring organisation. According to the 2019 database, Spotify has acquired 17 organizations like- Sound better, Anchor, Parcast, Gimlet media, Niland etc. On Feb 5, 2020, Spotify has acquired one more company namely The Ringer which makes its acquiring count as 18.

In the year 2019, Spotify made a total valuation of $29.5B. As compared to 2018’s valuation Spotify has earned 1.25% more in 2019. Behind this huge rising its constant effort and demand for the app development company who brings success towards the apps like Spotify.

It first launched its app for Mac and after that, it constantly spread to windows, android, ios and Linux. This helps them reach a larger section of the people.

The funding process is all about gaining and raising the total amount which can help the company. Since its foundation, this music streaming app has raised $2.7B in 22 funding rounds which include multiple debt financings.

Pandora, Apple Music, Google Play Music, Amazon Prime Music etc. Among all of the mentioned competitors, Apple music has been the biggest rival with Spotify.

1. Number of Unplayed Songs by the Users

About 25% of songs on Spotify have never been played by the users. As Spotify offers various music streaming services segments to its users.

2. Number of most popular songs played on Spotify

The Billion times played music on Spotify are “shape of you” “Havana” etc. which is calculated as 25 songs.

3. Number of times the Personalised songs are played on Spotify

20% of the songs which are played on Spotify are personalised. As Spotify has offered its customers three segments i.e. personalised, UGC and curated music. 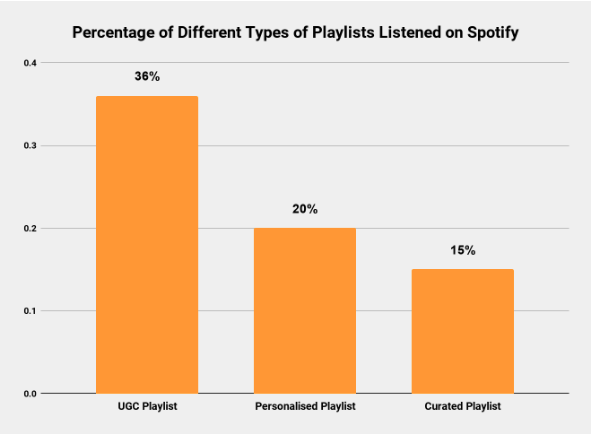 4. Number of songs added to Spotify every day

About more than 19,000 -20,000 songs are added to Spotify every day. Which means the greatest music experience to the users every day.

5. Number of playlist and tracks available on Spotify

About 40 billion+ playlist and 60 million+ tracks are available on Spotify. Which user can access easily. But the access totally depends upon the free and premium users subscriptions.

6. Number of podcasts available on Spotify

Around 100,000 Podcasts are available on Spotify which is the best reason to attract any user towards it. Spotify also provides video and lyrics in the songs. So, the user can easily watch, sing or listen to music at the same time.

1. Majority of users who have registered from their social Account as per user statistics

The majority of the users who have been registered from their social account are 55% users. This facility helps Spotify to reach the larger segment of the users. This provides a special platform to the users so that they can actively use the services provided by Spotify. 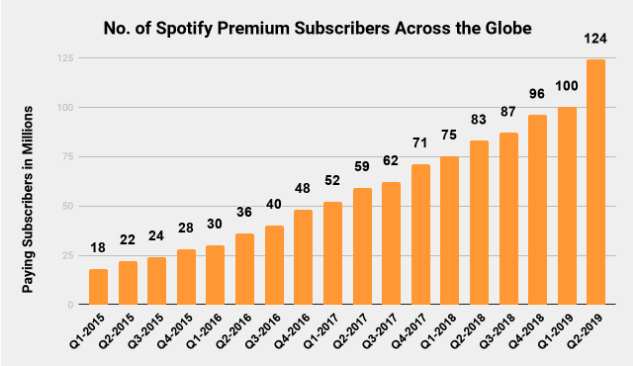 According to the year 2019 Spotify user statistics, the number of monthly users is estimated as 232M. It was estimated to reach 245M to 258M but surprisingly the result comes out as 271M in the fourth quarter. 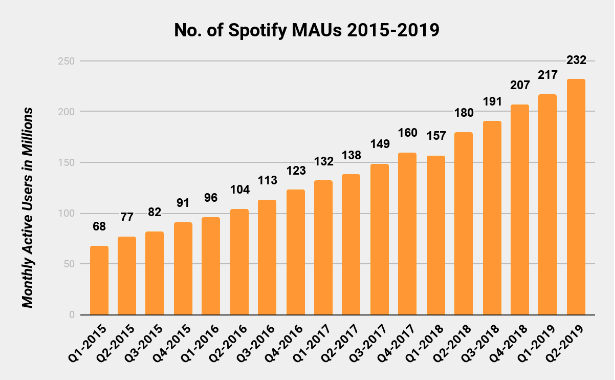 4. Majority of Spotify users from the USA as compared to other music streaming services as per user statistics

According to the researched data, it was found that the USA has the largest Spotify market which can be a target for the future revenue generation country for Spotify. The total Spotify users from the USA are 47.7 M as the monthly users. It’s India who is not legging behind the league of using Spotify. As Spotify is used by the 2M users in India. 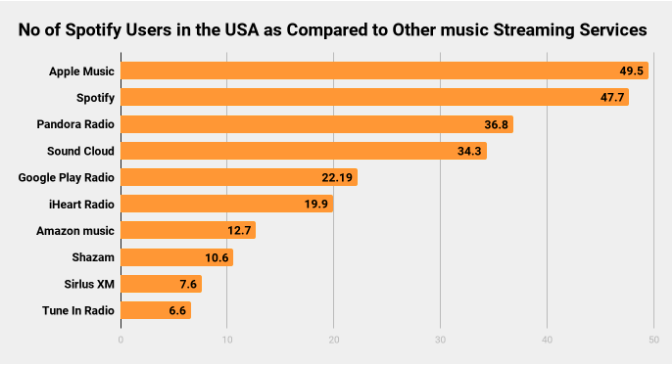 5. Number of Spotify users according to the Age group and gender demographics

The highest number of Spotify users base is from the millennials that are of 25%. And in the gender majority, the highest majority is of males as compared to the female users although there is not much difference in the ratio. The male ratio is 56% and on the other hand, the female ratio is 55%. It was also observed that 44% of Pandora subscribers have moved towards Spotify as per their own decision. To make the age group statistics and Gender statistics understanding better we are showing the statistics data through the chart. So, let’s take a look…. 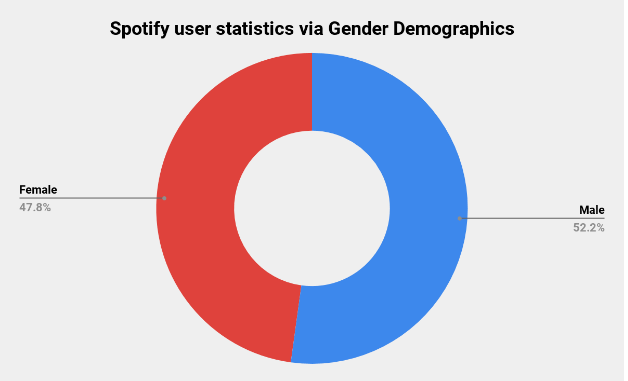 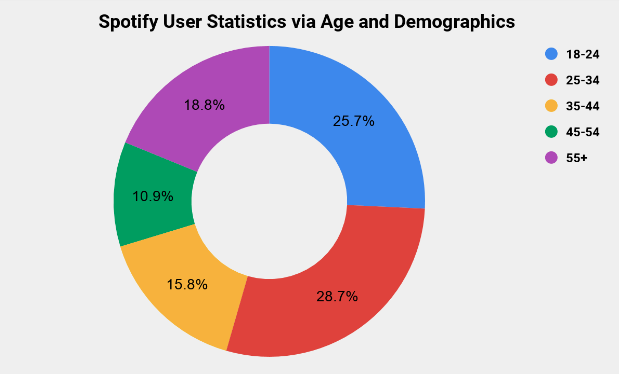 On average it was observed that Spotify is played 148 minutes a day by the users of Spotify.

2. The platform for listening to music

3. Music consumption by the premium subscribers

Spotify offers premium subscription to its users so that they can listen, music in premium quality. On average, the premium subscribers devour 2.4MB to 115.2MB a day. But the price for having premium features are too high as compared to other songs streaming apps. This increases the chances of the user to move towards the other services like Apple Music. To remove the high-risk Spotify offers it’s premium users the normal streaming option which is free. All they need to do is change the settings and make it to normal streaming after that they can enjoy the songs.

4. Number of artists listened by the users

Usually, the user devotes 35-42 artists a week. This increases the popularity of it also helps Spotify to target a larger section of the audience.

4. As compared to other apps it was observed that 15% of the USA audience are adults who play the songs on Spotify. 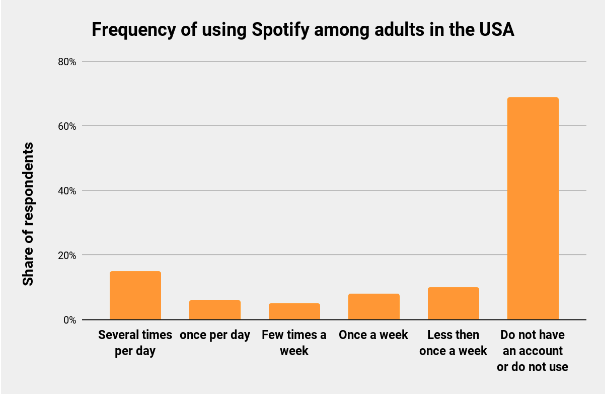 Market and Revenue Statistics of Spotify 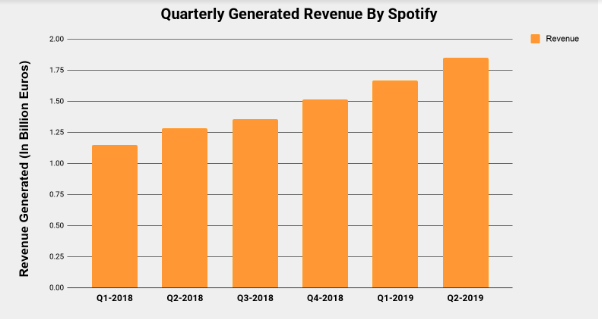 3. Revenue generated by Spotify from subscribers and Ad-support

It was observed that Spotify has earned 4.75B from premium subscribers and from the ad-support Spotify have earned 0.57B. 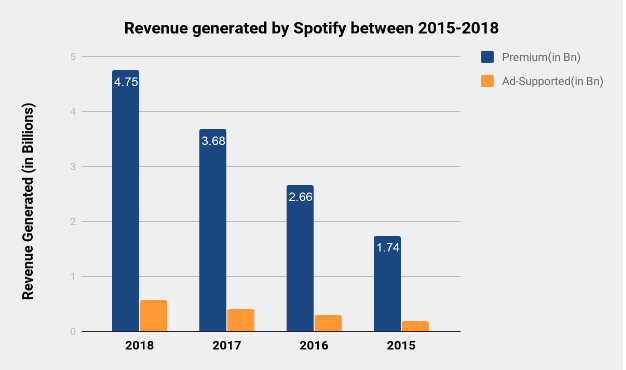 The major earning target source for Spotify is the USA. As the highest devour of Spotify are the USA audiences as compared to other music streaming services apps. The revenue-generating statistics has shown that 76.37% of the payment has been done by the royal or the premium music subscribers.