Kotlin vs Java: Which will Succeed Android Development in Coming Times?

We all know the importance of mobile applications in our lives. Many reports from Statista share critical information that mobile apps on the various stores are going to double in coming years. So, developers try to use different languages in order to make new ways of creating apps. There has been a simultaneous increase in cross-platform programming, a much awaited switch from core native and an increase in interest in progressive web apps. The new technologies like Kotlin, AR, VR, IoT, Chatbots have further strengthened Android App Development.

Now there are various languages in the market which developers are using to develop mobile applications. But few know that Android has officially adopted Kotlin as the supported language for mobile development services. Android developers are often confused as to which programming language would acquire the scenario in future but Java is still favourite for most of the developers for android app development. But before that you must know the difference between Java and Kotlin. Android apps can be written in any language and can run on Java Virtual Machine whereas Kotlin is one such JVM compatible programming language that compiles down to Java bytecode and has really caught the attention of Android Community.

Kotlin was first introduced by JetBrains in 2011 and is a general purpose programming language. JetBrains are alse behind some of the other top IDEs like IntelliJ IDEA, PyCharm, and many more. It got its name from Kotlin Island in St, Petersburg, Russia. Kotlin was actually created to be better than Java in every possible way. But Jetbrains didn’t put an effort to write an entire new IDE from scratch and it is one of the reasons why Kotlin was made 100% interoperable with Java. Kotlin, a sharing and app-cloud based services which offer a higher level feature set like Google Firebase will feature on Android as a platform in coming times.

Interoperable: Use any existing libraries for the Android, JVM, and the browser 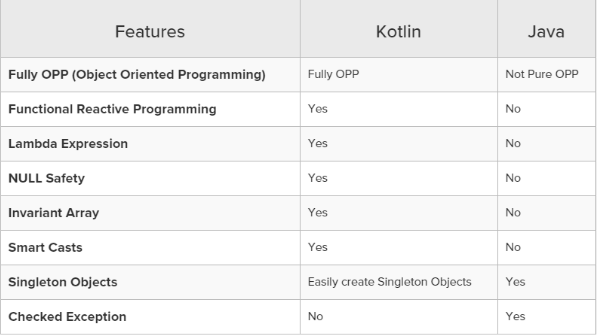 Why would a Java Developer Switch to Kotlin?

Android development has always been tagged with Java development. But Kotlin has outpaced it in performance, simplicity, maintainability, robustness, and lightweight code. Developers and users always look for feature rich, effective and cost-efficient mobile apps that help increase the efficiency of processes, increase competencies, meet customers expectations, help maintain business reputation and remove uncertainty. This is quite a bit. Google has already extended its support to the Android community for using Kotlin as first class language.

Kotlin has added some modern features to Java Mobile Development ever since. It is an object-oriented language that is the second most loved language on GitHub. Being there for more than 20 years, its popularity only seems to grow. Kotlin always has Java by its side, due to the presence of Android SDK. Slower compilation seems to be the only feature that needs an update in Kotlin. Famous Java use cases include Android-oss, NewPipe and WordPress Engineering, etc.

But the main reason behind Kotlin’s adoption is that it addresses issues left behind by Java and ranks amongst the top 5 favourite programming languages and forms the basis of Android development. There can be many reasons why Java for Android Development is not always preferred.

2. Android only supports a subset of Java 8 features.

3. Android developers are not able to reap full benefits of Java. In case they require making use of Java, then they will have to stick to Java 7.

6. Do you still need to remember most of the code while you code in Java? It can be creepy and messy sometimes.

How can Java to Kotlin conversion be done?

Heard about JetBrains’ Java to Kotlin converter integrated into IntelliJ ? It seems like an easy option but is not completely error free. But it can help save a lot of code. Migrating the entire Java code can be tiresomely long without it.

What Kotlin programming language does better?

a. It removes the tragedy faced while adding an existing object.

b. Omits the need to learn new languages.

c. Removes or reduces the need to write native code for some features.

d. Drops the need to be laggy in some specific cases.

Kotlin is the merger of both functional and procedural approaches and aims to bring out the best from two. Once you gain experience in Java application development, you will have an even better understanding and appreciation for Kotlin.