Economy During and After COVID-19: The Way Ahead…

The global pandemic and a human tragedy, COVID-19 or Coronavirus has brought global economies on the backfoot. The virus has impacted over eight lakh people as per the latest figures of Worldometer and the figures are alarmingly on a rise. The loss of human life in such a tragic manner is indeed heartbreaking and the aftermaths are almost unimaginable. The society has been hit massively – travel has been disrupted, both locally and internationally, global communities have been cut off, industries and businesses have suspended or curtailed operations and economic markets are literally shaking. The manufacturing sector at the global level is facing its worst possible times after the Great Recession of 2008.  The pandemic has triggered a potential economic slowdown with much of the U.S. and Europe under lockdown for a month or two. Considering the potentially serious implications for the global economy from COVID-19, a slew of relief measures have been announced by countries worldwide.

Kristalina Georgieva, Managing Director of International Monetary Fund issued a statement in which she indicated regarding the global growth, “ For 2020 it is negative – a recession at least as bad as during the global financial crisis or worse.” But she also added: “ We expect a recovery in 2021. To get there, it is paramount to prioritize containment and strengthen health systems – everywhere.”

The OCED (Organization for Economic Co-operation and Development), warned on 23 March 2020 regarding the shock and intensity of COVID-19 which is quite bigger than that of the global financial crisis of 2007-08. The OCED has also warned that it will take years for the world to recover from the aftermaths of this global pandemic. Angel Gurria, OECD secretary-general, said that the major economies of the world, in the upcoming few months would fall into recession- defined as the two consecutive quarters of the economic decline. “Even if you don’t get a worldwide recession, you’re going to get either no growth or negative growth in many of the economies of the world, including some of the larger ones, and therefore you’re going to get not only low growth this year, but also it’s going to take longer to pick up in the future,” he added.

On 5 March 2020, the International Airport Transport Association said that the outbreak that took place in China initially and then massively hit the rest of the world could cost airlines to the tune of $113 billion in lost revenue pertaining to the collapse of air travel.

Seeing the probable impact on aviation, recovery calls for urgent help for airlines across the world from their respective governments in waiving few of the requirements, taxes and fees to reduce the burden on the struggling carriers.

Brian Pearce, the IATA’s chief economist, said, “ The industry remains very fragile. There are lots of airlines that have got relatively narrow profit margins and lots of debt and this could send some into a very difficult situation.”

Overall a 19 per cent loss for airlines in terms of worldwide passenger revenues was reflected by the estimates of IATA and the biggest losses would be incurred in the region of Asia-Pacific, including China, which was one of the countries worst hit by the pandemic. Apart from the aviation, travel and tourism industries were majorly hit early when the disruption took place due to the outbreak.

Italy has already shut down all its nonessential factories in order to bring a halt to the coronavirus outbreak.

Industries worldwide are bracing for a major slowdown and disruption to global production especially the pharmaceutical industry since February expressed fears of drug shortages pertaining to the lockdown in the entire country. India is the supplier of nearly half of the generic drugs (almost 40-50%) to the U.S. The global supply chain for the pharma industry which relies heavily on China and India could face serious disruptions in the current as well as the future times.

Several cultural, sporting events and major trade shows across the world have been either cancelled or postponed due to the pandemic.

According to the strategists at Goldman Sachs Group Inc., the companies in the U.S are not expected to register any growth in the earnings in the year 2020 due to the massive disruption caused by the COVID-19 across China, which then spread to the U.S. and other countries as well.

However, there is no way to exactly assess the economic damage that this global pandemic will cause, however, the economists across the world agree that it will have far-reaching negative impacts on the global economy.

Major Highlights and Statistics from the Summary Report by Statista 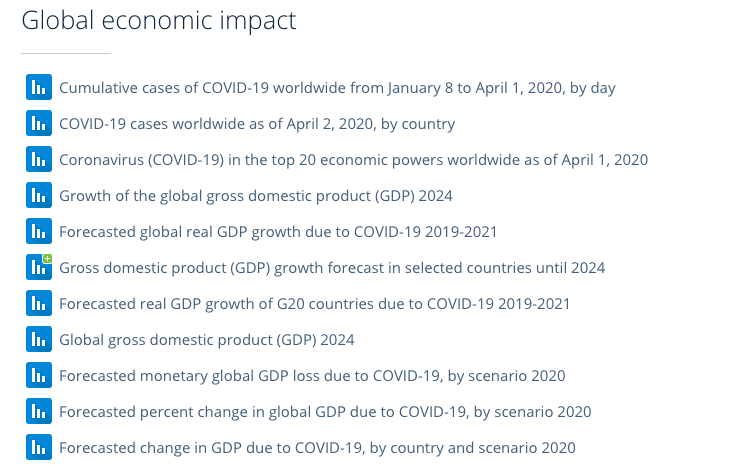 1. Best Case Scenario – Under the best-case scenario, a two-month duration of travel bans and a sharp decline in the domestic demand is predicted. In this case, the monetary loss of the global Gross Domestic Product (GDP) is expected to be about $76.7 billion due to the COVID-19 outbreak.

2. Worst Case Scenario –  Under the worst-case scenario, a six-month duration of travel bans and a sharp decline in the domestic demand is predicted. In this case, the monetary loss of the global Gross Domestic Product (GDP) is expected to be about $346.98 billion due to the COVID-19 outbreak.

Loss in value of selected stock market indices worldwide between March 6 and 18, 2020 (During Coronavirus Outbreak)

Between March 6 and 18, 2020 all the major stock market indices lost value due to novel coronavirus. The following table shows the major indices and the respective loss in value (in %) : 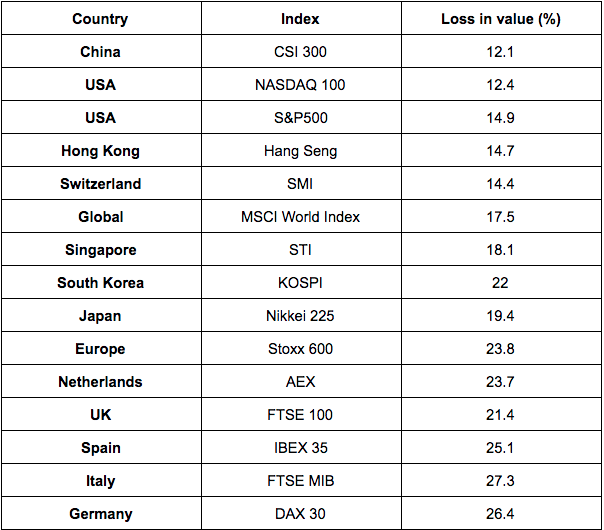 The Dow Jones Industrial Average index registered a decline of 8,000 points in the four weeks from February 12 to March 11, 2020. The Dow has registered significant daily point losses including 1,191 and 2,014 points on February 27 and March 9 respectively.

Impact of COVID-19 on major industries

a. As per the Mobility Market Outlook on COVID-19, there will be a slump in the global revenue for the travel and tourism industry by 17 per cent from the previous year i.e. $568.6 billion, which is quite lower than the original forecast of $712 billion for the year 2020.

b. As per the Mobility Market Outlook on COVID-19, the revenue for the travel and tourism industry in Asia will be most affected by the COVID-19 pandemic.

c. Due to the pandemic, the forecasted business travel revenue loss will be around $810.7 billion worldwide, in the year 2020. The country of origin of the virus, China, is projected to incur the major loss due to the novel coronavirus, amounting to $404.1 billion.

a. As of March 2, 2020, an estimated decline of 33 per cent in the number of air passengers in Europe has been forecasted due to the extensive spread of the COVID-19 pandemic. At the same time, the passenger revenue is predicted to decline by approximately $ 57.3 billion in the region of Asia-Pacific.

a. The novel coronavirus will have an impact on IT spending as well. The worldwide 2020 growth forecast for IT spending has been adjusted for the impact of COVID-19. The IT industry in comparison to the previous year is growing by 4.3% in 2020 which is down by 0.8 per cent points from a projection (5.1 per cent) that was made earlier in January 2020. The data for March 2020 has led to the forecast of two possible scenarios for global IT spending – under the “probable” scenario, the IT spending has been projected to grow by 3.7 per cent compared to 2019 while the “pessimistic” scenario showcases the growth of 1.3 per cent in 2020.

To answer the question “What will be the state of the economy and possible future after COVID-19?”, we would say that there are a number of possible futures but that will primarily depend on how the governments across the globe along with the societies will respond to COVID-19 and its aftermath. Hopefully, the world around us will use this global crisis to rebuild and develop something that is much more humane and offer better value to human lives.