Python is an elite in the field of high-end programming languages used when it comes to web development. This high-level programming language with built-in data structures and easy to learn syntax has made this language the most sought-after choice of any developer working on up-to-date apps and websites.

Undeniably, the python framework is the most potent abstraction employed to develop some robust and highly responsive ecosystems that are available at user’s fingertips to give them a personalized experience with the help of AI, AR, VR, and ML.

Python is an interpreted, high-level programming language that emphasizes code readability to construct some top-notch websites, apps, and software. The language constructs and the object-oriented approach of Python make this language versatile enough for IT developers to present clear and logical coding resulting in some best low and high scale masterpieces.

Python is a foremost delegate for general-purpose coding which means it has high-level built-in data structures that support scripting for web app development, infrastructure management, data sciences, and system scripting as well.

Python is entitled as the ‘glue language’ which helps to integrate the other components of the software so the ecosystem works well.

What is a Python Framework?

A python based web framework is a full-stack combination of data structures, UI libraries, plugins, and modules that allows the developers to come up with some robust websites or web apps that have integrated technology like AI and ML.

The graph below statistically represents the popularity of the top 10 programming languages based on Google search and viewed tutorials. Python tops the list with 29.9% of viewers searching for information and tutorials, preceded by JAVA (19.1%) and JS (8.2%). (source: Statista) 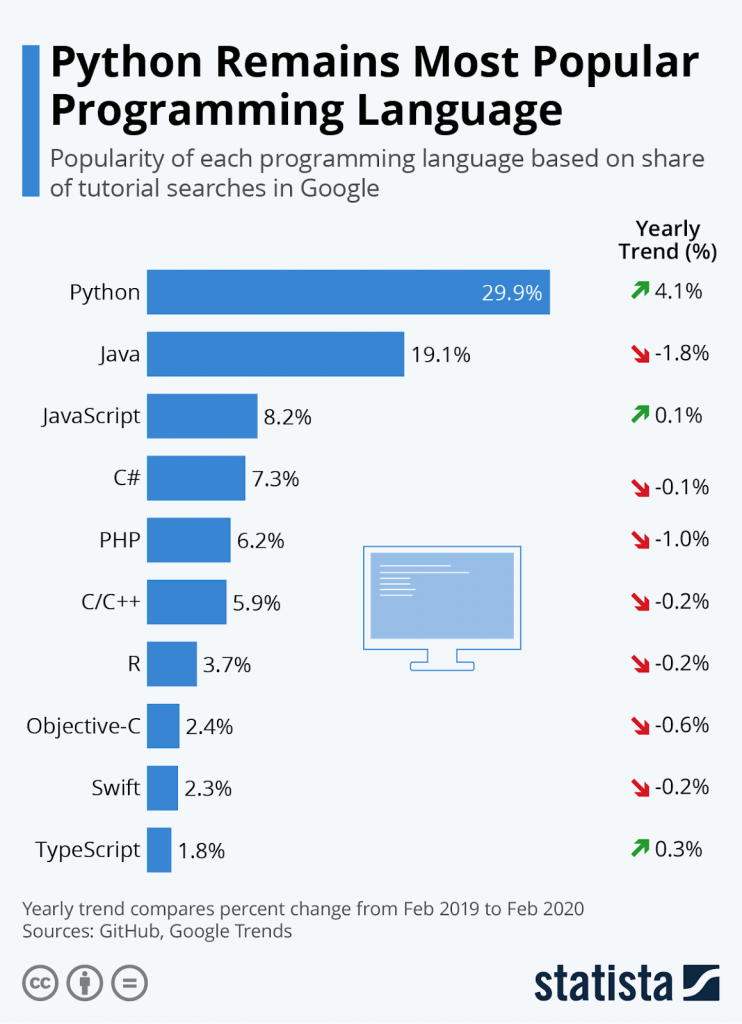 -> You can get open-source python frameworks for web development. Stay tuned to know some best Python Frameworks in 2021.

-> Easy development, testing, debugging, and maintenance. You can opt for Python Frameworks if you wish to reduce your time to market the website, app, software, or web app.

-> It is a glue language connecting the other components of the software.

-> Amalgamates with other languages like JS. for Eg. pyjs (used to make rich internet applications for web and desktop use).

-> The language is easy to learn and implement.

-> A sedate yet efficient and versatile coding for professional output.

-> Keeps on evolving and is a go-to technology when it comes to interactive and dynamic web apps.

Below is the list of the 15 best open source python frameworks that can be used for building some high-end masterpieces to pace with the trends of 2021:

The python-based open-source framework responsible for some robust and dynamic apps, websites, and web apps. The framework is behind the making of popular web apps like Reddit, Insta, Spotify, Pinterest, etc.

Narrowing down our search to the top 5 Python Web Development Frameworks, Django still tops the list.

-> You can hire an automatic admin interface feature instead of making one from scratch. It includes editing, adding, deducting, and optimization of data.

-> Versatile in nature – the framework creates the best base for any application or web app with the scope to integrate technology.

One of the oldest yet efficient in the league, CherryPie is the most stable yet quick framework that gives you the flexibility to use any technology for large data access and pattern-wise organization.

-> Can be used with other frameworks that support python

-> It has an object-oriented paradigm.

-> One of the most flexible open-source frameworks that are confident enough for commercial-level software.

The utility comes under a BSD license – inspired by the Sinatra Ruby Framework. This python-based framework is highly impressive and leads to the development of some highly responsive web applications due to its small and easy-to-extend core.

-> Efficient for both client-side and server-side scripting.

Pyramid (web framework) is reaching heights in terms of popularity. As it is a flexible approach it is extensively trusted by the developers in the making of custom web apps. The framework is embraced by corporate giants like Mozilla, Yelp, and Firefox.

-> Used to make web apps with a minimalist approach

-> Designing to develop and debugging is possible.

Helps web developers to create, modify, debug, deploy and manage web apps via a browser. The framework can be used to build high-end cross-platform apps that easily are operated on Windows, Unix/Linux, Google App Engine, etc.

-> An open-source framework for secure and database-driven web apps.

-> Developers can work with rational and NoSQL databases to develop high-end data-driven applications.

-> Comes with useful batteries that are potent for making efficient web apps without the need for external tools and services.

-> No installation and configuration requirements.

-> Ability to run on multiple OS.

-> Integration of Web-based IDE to facilitate processes such as code editor, compiler, debugger, and GUI builder.

Grok inspired by Zope toolkit technology (advanced object-oriented set of libraries) is a web app framework that is easy yet efficient and emphasizes agile development.

-> Convention over configuration paradigm to prevent developers from losing their flexibility while coding.

-> Supports DRY – Don’t repeat yourself – the principle aimed at reducing the repetition of the software patterns eventually avoiding redundancy.

-> A stronger base that leads to highly scalable and extensive web applications.

-> Can be used by both beginners and experienced Python Developers.

Made with the intention to eliminate the flaws in many web and mobile app development frameworks, it is a full-stack Python framework that provides a powerful base for developers to start building their web apps.

-> Has Object Rational Mapper (ORM) and AJAX for programming and server.

-> Easy deployment of complex widgets to develop some powerful interactive and appealing websites.

The Python-based framework that supports the quick development of small-scale web apps. Initially introduced to make web APIs, it is now supporting web development as well. In fact, it is considered a lightweight, fast and simple framework for web development.

-> It is independent of Python Standard Library

-> Developers get the opportunity to not only develop the apps but also learn Python language and prototyping.

-> Routes for URL mapping. worked in HTTP server and backing for glue, fapws3, flup, and other WSGI compliant HTTP servers.

-> Optimized and high-performing framework for the robust and feature-rich interface.

An event-driven open-source networking engine based on Python language. The utility is used to build some real-time web apps showing custom results to the users (giving them a personalized experience)

-> Supports both client and server-side coding

-> Support for popular network protocols like HTTP and SMTP

-> Integrate a web server, mail server, and IRC without configuration.

It is a python-based library to pull data from HTML and XML files. It makes it easier for web developers to scrape information from web pages. It provides Pythonic Idioms for searching and modifying the parse tree (python syntax tree).

-> Helps in locating content that is buried under HTML structure.

-> Not specifically for web development but it supports data processing and web scrap[ping.

-> get() features help you fetch any web page you need.

-> find() helps the developer to search for any data from the web.

A Python-based web framework that uses non-blocking frameworks I/O and C10k issues to cope with 10,000+ simultaneous connections at the same time.

-> Integrated with a standard library.

-> Client and server-side implementation of HTTP

-> Offers a coroutine library that allows asynchronous code to be written in a simpler way.

-> It is a full-stack substitute for WSGI

Open source Python-based web app framework, Blue Bream has large libraries and servers for website and web app developers. A product by the Zope team, it was formerly known as Zope 3. The framework can be used to build small to medium and large-scale apps with well-labeled sections.

A robust Python-based framework for developing some efficient and high-performing web apps that are also adaptive in nature. This python framework for web development is built in traditional technology, so if a developer wishes to work with the authentic Python programming language then Quixote is highly recommended for them.

-> Simple yet versatile design with sessions of API management.

-> Quixotes 1 and 2 seem to be similar but are incompatible with each other.

-> Compatible with any web server that supports CGI (Computer Generated Imagery) and FastCGI.

-> The open-source API uses Theano or TensorFlow for its backend.

-> Supports deep learning with the implementation of deep Neural Networks.

-> It offers simple and stable APIs.

-> Numerous layers and parameters implemented in the API.

Web development is the demand of this digital era and that too with the implementation of advanced technology. Aforesaid are the popular and robust Python frameworks for web development that creates a powerful base for coding and further is versatile and flexible for business-oriented customization. These are free open-source frameworks for full-stack web app development with less time to market benefit.

Where do Cross Platform App Frameworks Stand in 2021?

Hybrid vs Native Mobile App Development – Which one is Better for your Business?