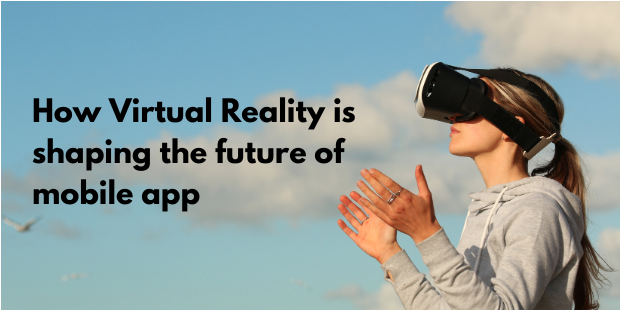 Virtual reality is one of the fastest expanding technologies in the market. The potential this particular technology holds is very wide and businesses are acknowledging the benefits that come with it. Almost every sector and organization are adopting this advanced engineering to give their user a better and smoother experience. Along with virtual reality, the mobile app development market is progressing at an alarming rate as well. Every developer and company want to be on the top of the market trend and clubbing these together is in vogue nowadays.

According to Grand View Research, 2020, the VR sector is expected to grow at an average of 21.6% every year between 2020 and 2027. The incorporation of VR for commerce has been specifically famous among businesses. Before learning how VR is going to change the landscape of mobile app development, let us first understand what it broadly means.

What is Virtual Reality?

Connecting users with the three-dimensional world is what VR is all about. The generation of simulated environments with the use of advanced computer technology is how one can define Virtual Reality. Instead of only giving an interactive experience, the user is placed inside the experience. This is why it is also called immersive technology. Now the question may arise if this is suitable for your field of business or not. Whether you are in fashion, manufacturing, health, or entertainment, your business could use a hint of VR to it.

-> Giving a 3D view of the locations and places in travel mobile apps sounds like an idea, doesn’t it?

-> Providing an inside view of a vehicle to your customers is also an option.

-> Customer experience can also be improved through VR with Live chat options.

When it comes to mobile app development, virtual reality applications have two types: environment and interface. As the word suggests, the environment is basically when you place the user in a particular place with the help of virtual reality glasses, commonly known as Head-mounted display or HMD. For instance, placing a student in the forests of Amazon to help them better understand the flora and fauna there. Talking about the interface, these are the set of elements that helps the user interact with the environment so the user could navigate better. The complexity of VR apps could be calculated by using these as two coordinates.

To better distinguish between the two categories on the above-mentioned basis, we can take the example of already existing apps. To give VR experience, entertainment apps have inculcated this technology such as Netflix, YouTube, etc. To better understand the interface, we can take the example of Google Earth 3D which allows us to render any 2D object on our planet to 3D view.

Steps involved in the creation of Virtual Reality apps

The fact that VR apps have a lot in common with the traditional ones makes the process of creating them easy. The dynamics are quite simple, to help the user interact with the interface better and help them navigate. The process is simple and follows particular steps only. That’s why every developer can create immersive virtual reality apps that meet all user ends.

Google Cardboard is one of the most famous ways to create a VR app and immerse yourself in it. It can be used with Android phones with OS versions 4.4 and can also be used with the iPhone. However, the quality is low. Another option, albeit a bit expensive, is Daydream VR. This is another Google product. Although it works for Android options only. Another choice is Samsung Gear VR which is created by Samsung together with Oculus VR. This works best with Samsung Galaxy devices. It has a high-quality lens along with a touch screen control panel, and the handheld controller gives a better experience.

Use a special 3D engine

The best part about today’s market is you have options everywhere. Unity and Unreal are the two most widely used 3D environments used for games and VR features. Both are simple to use. Unity, however, is much easier for VR development.

There are a few things to remember while creating a VR application.

-> The workflow would be simple in a good VR app.

-> The UX design should be simple for the user to understand and access. One shouldn’t get tired while using it.

-> The response to head movements should be faster for a better user experience.

-> If it’s a smaller session, it should consume less battery.

Tools such as Blender and Autodesk are used for this step to fill the VR app with 3D elements. To go about the interface, first, a prototype should be created followed by a visual design to make it more engaging, and then, the organization on the screen is done. Since the canvas size is very large (360 degrees), it is best to determine the section beforehand in which the design in the VR interface is to be inserted. It should be where it is visible the most, generally in the mid.

Just like any other app, a VR app should perform optimally too. Along with the logic and the logic integrated into the UI, several factors such as battery consumption, 3D performance, and overall app performance should be optimized too. A few things to keep in mind are:

-> The app should be optimized for 60fps

-> Debugging tools should be integrated

-> CPU and GPU throttling should be enabled

Last but not least, it is crucial to determine the usefulness of the app, and if any changes need to be done. The development of VR apps takes more time to complete because of its higher complexity. Hence, testing takes comparatively more time as well. Along with testing the functionality using different test tools, the performance of the app is also judged by graphic engines.

Even after VR technology is widely known among a lot of users, we are still at the early stages of its use. With time, however, a boom is expected considering it will also become more accessible. Developing better mobile apps for your businesses and organizations is necessary to compete better in the market, and VR opens a new path to do the same with ease at an affordable rate, bringing in better profits and more satisfied customers.