React.js Vs React Native – Differences, Pros and Cons of Both The Platforms 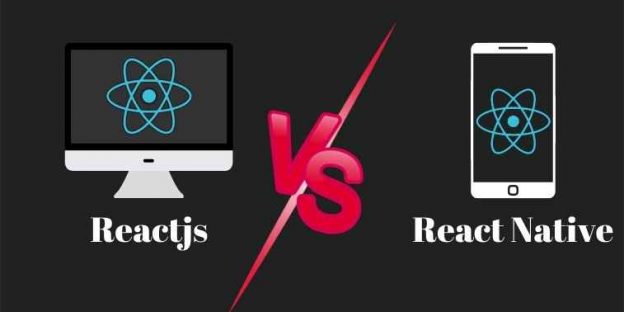 Introduced by Facebook, React.js is the revolution of the current times building some highly responsive user interfaces. React Native – the framework built on React.js, both the utilities are currently empowering technology to create some highly responsive web apps cross-platform apps with the native feel and look.

By the end of this article, you will come to know the difference between React Native vs React.js, their features, and the pros-cons set for both the technologies. Let’s explore everything that one needs to know about react-native and react.js.

Let’s start with the history and origin of React Native and React.js

History of React.js and React Native

Currently, the most popular technologies giving architectural and performance support to highly dynamic and responsive applications, React.js and React Native are the endeavors of Facebook. These two utilities help mobile app developers and cross-platform app developers build complex UIs faster and with ease.

“The biggest mistake that we made as a company is betting only on HTML as opposed to native”. said Mark Zukerberg CEO Facebook.

In 2011, Facebook was re-vamping its Facebook Ads to expand and induce new features, software engineers realized that constant updates and changes are hindering the efficiency of the application. They needed to re-vamp the entire app in order to succeed in what they have planned on introducing. Facebook App needed an interface revolution.

Pumped by the immediate need to re-vamp the built-in system, Jordan Walke (a software engineer at Facebook) used XHP (an HTML component library for PHP) to build FaxJS, the first prototype of Reactjs.

This was the big turning point for Facebook. In 2011, React.js was used to revolutionize Facebook’s timeline, and later when Instagram was acquired by Facebook, the same technology for its timeline as well. Followed by the success of React.js, React Native the React.js-based framework was introduced.  In no time, two of the most powerful technologies emerged: React.js and React Native.

This is so far the best combination to build enterprise-level business web applications, mobile apps and responsive websites. The coming segment has React Native vs React.js – its eye-opening comparisons that is creating an intellectual itch in the minds of web and mobile app developers making them think harder on implementing and executing these technologies.

React.js vs React Native – Comparison based on the Advantages

Introduced by Facebook, React.js is the Javascript-based huge UI development library having thousands of design and development components. It supports both front-end and back-end (server) programming for mobile apps and interactive websites.

React.js using DOM (Document Object Model) owns the capability of building applications that have a performance edge and are fast making the app the best choice for the end-user.

React builds an in-memory data structure cache that updates the browser’s displayed DOM by computing the resulting difference. While the app developer writes the code it seems that the entire page is dedicated to the change where only the sub-components are changed.

Speed is the most important factor that keeps an end-user from darting to other sites. We have seen the functionalities of Facebook and Instagram web, React.js holds an edge in terms of speed and performance.

2. Component-based architecture to save time

React.js being the component-based UI development model supports the reusability of components substantially reducing the time for app development. The component-based structure utilizes the smaller segments of the large UI component system and converts them into standalone miro-systems. If some major changes are done to Adset for Facebook Ads then only the Adset component will be re-used and re-defined rather than the entire Facebook Ads interface.

A web app or a responsive site built with React.js is SEO compatible, as React.js is capable of server-side programming. With server-side content, Google crawlers will easily identify the rendered content and images which will further aid in faster indexing and caching.

The online business ecosystem built on React.js is itself an upper hand for SEO experts working to enhance the visibility of any business on Google SERPs. Enhanced visibility on SERPs plus the performance edge, from every perspective this is the best deal for any business striving to make an online presence.

React.js is an extensive community of components, UI libraries, tools, IDEs, extensions, code editors and web browsers created by and edited by thousands of developers. Tools, libraries and components introduced by developers made React.js the best ever utility to trust with your app or web development requirements.

What is React Native?

React Native is an app development framework built on React.js. The framework is used to build dynamic applications with content and feature hierarchies. React Native compiles with the native app components letting the app developers build applications for various platforms like Android, iOS, Windows in Javascript without introducing heavy changes to the source coding.

React.js is used to build components for React Native and React Native implements React.js in its framework to build robust applications using Javascript as its core programming language.

One of the biggest advantages of React Native is it supports cross-platform app development with platform-specific code. So that the application easily adapts to the OS functionalities and configurations for which it is built. React Native framework holds the capability to detect which platform it’s being run on so as to generate the right code for the right platform.

The react native framework is based on the simple yet effective Javascript language that allows the front-end developers to build business-level applications in just a matter of time.

Javascript makes app development easier and fast, provided that you need to find an expert app developer with a thorough knowledge of Javascript (precisely React.js). The one who is well-versed with platforms, APIs, native UI and other platform-specific design patterns.

Why is there a need to manually re-load the app in its development phase? React Native powered by React.js supports the Hot Reloading feature that aids in re-loading the mobile application automatically. Automatic reloading accelerated the development, reducing the time to develop and test the application.

4. Ready To Use UI Libraries

React Native framework has a range of component UI libraries that developers can use to create a standard UI experience with implementation in less time. The UI libraries in the ecosystem are Shoutem, Expo, native base, and others – these exceptional UI libraries help you build the application from scratch which means you can be as innovative as you want with your application.

React Native vs React.js – Difference Based on Limitation

Every utility comes packed with a set of advantages and limitations. Paying attention to advantages will not take you farther with the development if you are not aware of the challenges or the limitations of both the utilities. A professional app Development Company will focus on the limitations, so as to utilize the platforms potentially by mapping the future issues with their solutions.

Most often the developers need an external react enabled library to create the UI experience they want – this increases cost and time consumption. For instance, while working with the Carbon framework, developers need to induce crucial carbon components with React.

React.js is a more complex utility than React Native. For a mobile app developer in his learning phase, it is rather easier to work with React Native. Implementation, applicability and execution of React.js take quite a learning curve. This is often an issue for developers who believe in immediate action.

Though react.js coherently supports external libraries, there are very few libraries for React.js. External libraries let web app developers work with HTML and CSS languages to convert them into JSX that has its own set of complexities and needs accurate knowledge and a deep understanding of programming languages.

React Native is the best technology to build lightweight applications, but when it comes to heavy applications, React Native can slow down the process of development and take time as it does not have sufficient native libraries. Reliance on Javascript only is not a wise decision when it comes to complex calculation, to serve the purpose one needs to use third party libraries based on Swift, Objective-C and Java.

React Native is a loosely held abstract framework where a developer can use HTML tags and CSS stylesheets with Javascript language. But apart from the freedom, this can be considered as a major pitfall for the framework. Unlike Swift and Java-based frameworks, it doesn’t have any parameters or protocols. In the React Native framework, a variable can be anything – this can bring the mess to the system which is not the case with Swift and Java.

3. Needs a lot of native modules

Despite having a lot of standard functionalities, there are instances when React Native Developers do not find a certain functionality. In that case, the developer either needs to write the native modules in Swift/Objective-c and Java or ask another Native app developer to do so. With this React Native increases both time and cost consumption.

4. Takes Time to Initialize the Runtime

React Native is known to take more time than its counterparts in initiating the runtime on devices and gadgets. It is basically due to the Javascript thread that takes time to initialize.

Licencing and patent issues are here as Facebook owns React.js and React Native technologies. React Native is updated to Version 2, an additional grant of Patent Rights from Facebook and a BSD-style license. In 2017, Facebook updated its OpenSource Licensing and Patent for React Native and React.js. As per new protocols, if a developer uses these open-source platforms violating any norms set by Facebook, then the company has a right to stop that developer from using that open-source platform. React.js and React Native developers are under a dilemma as the apps that are built on these platforms will stop operating if their product doesn’t abide by the norms of Facebook.

The Most Viable Differences Between React.js and React Native

Though both the utilities are powerful and are a wise choice for building an enterprise-level application, one must know the most visible differences between React.js vs React Native as each has its own set of benefits, potentials and applicabilities. Let’s dive deep into React Native vs React.js.

React Native or React.js – Which is Better?

Whether it’s React.js or React Native platforms, both technologies are constantly gaining recognition for their flexibility, support and ever-evolving UI libraries. React.js is a component-based UI library built on Javascript coding while React Native is a framework built on React.js. In short, React.js is the heart of React Native.

Each web app development toolkit or platform has its own set of pros and cons and this is the reason for writing React.js vs React Native. Despite the limitations, you can still make an enterprise-level web application that will successfully serve your business goals, provided that you need to rely on an experienced mobile app development company to convert your business ideas into concrete web app solutions.

1 thought on “React.js Vs React Native – Differences, Pros and Cons of Both The Platforms”