What is Blockchain Architecture? (Structure, Core Components and Benefits)

Blockchain came in 1991 with the sole purpose of maintaining the digital document. Later on, the technique was taken over by Satoshi Nakamoto, and in 2008 as he brought to the limelight the first-ever cryptocurrency – the blockchain-based project called Bitcoin. Bitcoin was the only crypto that was not bought but mined.

Though cryptocurrencies are not acknowledged as Dollars or Dinars, their financial worth is the same as a physical currency and their flow needs to be channelized through a robust platform.

Also Read: How to Create a Bitcoin Wallet App: An Ultimate Guide

Blockchain is a decentralized and highly secured network protocol that lets people all around the world trade in Bitcoins or cryptocurrency. So far it is the most trusted technology to preserve and maintain the records of crypto transactions.

Due to changes in currency rates, people take crypto as an opportunity to invest for a good fortune, technology like Blockchain has made it even more easier and secure. If you want to invest in cryptocurrency or more than that if you want to create your own cryptocurrency, here is the complete guide to what is Blockchain architecture, with mechanism, core components, and ultimate benefits that you do not want to miss.

What is Blockchain Architecture?

Difference Between Database and Blockchain Architecture

Conclusion – Develop Your Own Blockchain Architecture

What is Blockchain Architecture?

As the name has it, blockchain is the chain of blocks that contain information (database) and is linked together in a secured peer-to-peer network. Blockchain links the computers but instead of a centralized server, the whole network is decentralized.

For instance, Google Docs – there were days when word files were shared and then we used to wait for hours for the other participant to make changes and re-send the same document. Google docs help us share the platform with other participants and they can access the same platform simultaneously. Moreover, the changes are visible in real-time. Similarly, blockchain allows the distribution of digital information and this distribution ledger promotes transparency and data security for all the participants.

Blockchain architecture always comes into the role when someone is talking about the crypto trade. More than that the technology helps software development companies to develop new and robust solutions for cryptocurrencies, record keeping, and smart contracts.

Difference Between Database and Blockchain Architecture

The major difference between the two is decentralization.

The architecture of the World Wide Web uses the client-based central server where all the information is stored under a single roof and is easy to access and update. The point to be noted here is that the server is the centralized database and is controlled by the administration with permissions.

On the other hand,

Blockchain architecture is a distributed and decentralized network where each participant can maintain, approve and update the new entries. In short, the entire system is controlled by its participants (anyone with the blockchain network). The participants make sure that the entire database is in order which results in easy data validations and data security.

In the end, blockchain is the decentralized and distributed ledger of transactions that are done under a P2P network – the network binds several computers and the data cannot be altered without the harmony of the entire network. This saves us from the threat of data laundering.

As said blockchain is simply the list of blocks holding specific information. These lists can be stored on the PC in the file (.txt format) or in the form of a database.

It calls for a shedload of money to hold the databases on a centralized platform (www), it is undoubtedly a secure way of preserving and organizing the current data, but blockchain serves the same purpose to a larger extent as the information stored in the blocks are interlinked with each other and no one can alter the data without altering thousands and lacks subsequent blocks.

The data once entered is hard to tamper with due to blocks linked via information with each other. Record validation too takes time as the data processes for each network independently rather than on a centralized server. So one needs to compromise with the performance speed, it is compensated when it comes to data security and validity.

The blockchain architecture allows you to check the transaction history anytime. This is a constantly growing list, whereas the centralized database is just the snapshot of the information in the present (with no scope of accessing the previous data).

The cluster of few organizations can access consortium blockchain architecture. In the consortium, the procedures are set up and controlled by the initially assigned users.

Here is the comparison between the three:

Blockchain is a distributed ledger where all the members have a copy. However, each type varies in centralization and decentralization which is in the hands of the blockchain developer who designs and the person who controls the ledger.

In public, all the members hold the right to access and can take part in the agreement process, whereas private is more centralized giving access to only the authorized personnel and with utmost privacy. 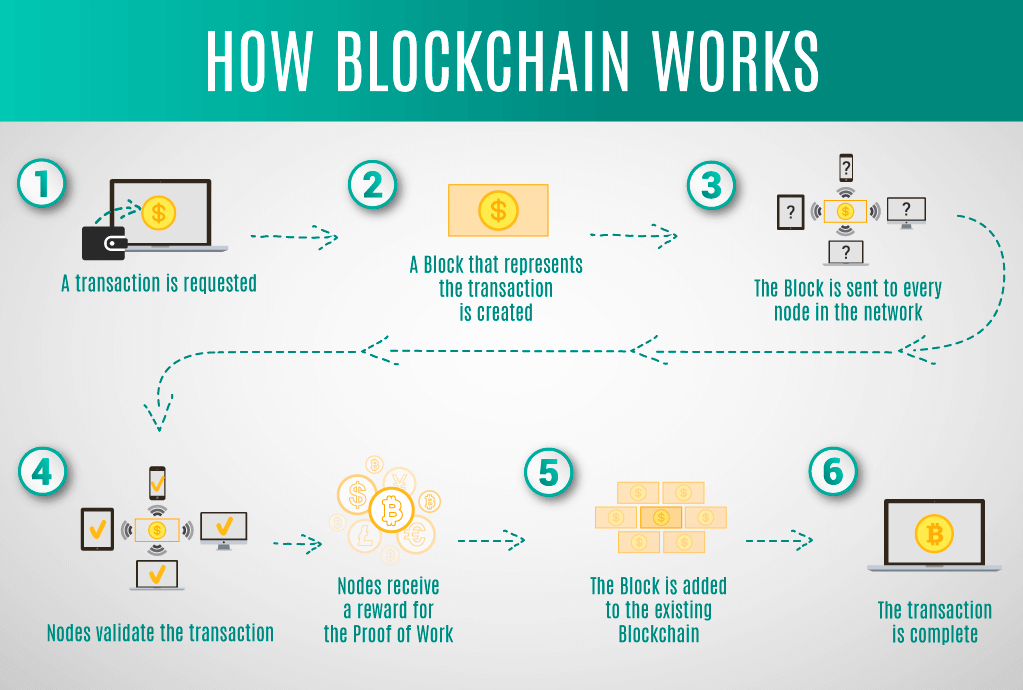 Each block holds data with the hash of the block and the previous block. The information stored in each block entirely depends on which blockchain architecture we are using.

For instance a crypto blockchain, the blocks hold the information about the sender, receiver, and the number of coins with the hash of the simultaneous blocks. The hash is the authentication (a series of letters and digits). Every block owns a hash and the change in the block will inevitably affect the hash.

It is possible to adjust the blocks with the help of a strong computer processor, the user can slow down the process of new block creation and the solution is called proof of work. For Bitcoin, this validation takes around 10 minutes including the work done by the nodes that are within the Blockchain Architecture. The miners then keep the transaction money as a reward for verifying the blocks.

All the nodes with collective decision create a consensus – means the set of protocols based on which the blockchain will function.

For Example, there is a consensus that the transaction amount will be cut in half once the blocks reach 200,000 – that means the verification reward is 10 BTS for a block then the value will cut to half after every 200,000 blocks.

So blockchain is a completely secured network with all its nodes verifying the process with consensus protocols. Data tampering is only possible if all the blocks are changed, recalculate the proof of work for each block and control more than 50% of the nodes in the peer-to-peer network.

As blockchain is a complicated and decentralized platform one needs professional blockchain developers to create the architecture. One can’t risk its functionalities with a freelance developer. The optimistic design includes working on functional specifications, UX/UI designs, and the architectural plan as the base of its development.

It is mandatory to acknowledge the app’s functionality with user roles and a robust system plan. Make sure that you and the blockchain app development company are on the same page even before you start with the development of the architecture.

There are some open-source solutions at the earliest convenience of the blockchain designers and developers, the widely acclaimed is Hyperledger by Linux – the Hyperledger composer provides the set of tools for developing the blockchain architecture. The other solutions in the market are Ethereum and Corda.

There is a lot of risk in every step of diamond manufacturing to its sale. Moreover, the end customers are worried about the authenticity of the stone, and government institutions want to track the flow of the diamonds in the market. Blockchain is the perfect architecture to eliminate the risks.

The blockchain system will bound all these parties in a P2P network and each individual will act as a node. As said above, all the verifications are done by the nodes. Each of the nodes will receive access to the synchronized data and the copy of the ledger which will help them keep the record of every step from diamond manufacturing to transport and selling.

In order to outline the processes happening at the same time, there is an Ordering Service. The service is shared among all the nodes to decide the transaction and the order. There is a Membership Service Provider that permits the entry of the users inside the network.

At last, all the transactions are stored in the general ledger (data including the photographs, extraction place, color, serial number, place of cutting, purification site, selling point, etc)

The blockchain network is set to achieve a purpose to create the link between the participants. All the participants must agree with the type of business transactions inside the blockchain structure. Physically this is done via legal agreements but in blockchain coding, this is called Smart Contracts (also known as chain code).

On legal papers, the blockchain contract has the list of participants, the assets, and the transactions but in the core, there is a Transactional Processor Function based on the JavaScript technology which lays out the process once the transaction is done. Javascript is the elite when it comes to core programming, the technology is responsible for developing some robust blockchain and other app structures that are highly interactive and scalable.

Blockchain development is a high-end task. Paying heed to the security protocols, UI, and the functionality of the blockchain architecture, at every step the skillset and the correct implementation of the core technology will be judged. As the entire system is linked and interlinked, one wrong implementation will reflect clearly in the system.

One must have a strong hand in Computer Sciences and the Engineering to make Blockchain development a full-time career. As technology is advancing and there is a need for synchronization of the processes, blockchain is here to remain.

The entire system functionality depends on the core coding for which the developer needs to be aware of the programming languages such as C++, Python, C, Java, and Ruby. also the web development technologies like HTML, CSS, and Node JS.

One needs to learn the contract-based programming language Solidity to write the Smart Contracts (the programs stored in the Blockchain to automatically exchange the coins upon transaction).

Moreover, for a custom business software development, the developer needs to have a deep insight into the business requirements and operations so that cooperation is not compromised.

Conclusion – Develop Your Own Blockchain Architecture

From the aforesaid descriptive, it is clear that blockchain is the best solution for trade, legal and business perspectives. In large chains, there is a need for synchronization and anonymity among the members. Blockchain development requires a skill set that you can easily avail by outsourcing your requirements to professional software developers who have mastered the coding languages and are well-versed with the scope of blockchain technology. There has to be a vision of how one can emulsify the technology in the software for optimistic results.

Blockchain functionality is capable of accelerating the transactions, reducing the cost, no intervention by third parties, robust digital interaction, and a lot more.

Blockchain technology with its transparent mechanism and the secured protocols can be used in any industry or business which makes it the next-gen solution. In fact, many solutions rely on blockchain TenX (to spend cryptocurrency), EOS.IO (functionalities for decentralized apps), Augur (for predicting market analysis), and so on. Blockchain is the smart solution to traditional problems (security, transparency, anonymity, and scalability).

1 thought on “What is Blockchain Architecture? (Structure, Core Components and Benefits)”