Who doesn’t own a Mobile phone at present? It’s been trending with a wide variety of versions and models by different platforms like Android, IOS, and windows. This evolution of the mobile phones took the inventory path towards the mobile applications also with different technology implementation. The prior technology of app development was dependent on the react native app development which used only for a single platform.

It was a tedious job for a developer to develop apps for different platforms. And had to learn too many coding languages that were too stressful. Made it complicated for app development companies to hire too many developers. They had to think about some solution to overcome these, so the topic of cross-platform was coined.

Development companies have a large amount in hiring and buying the technology is more expensive.

Usage of different platforms for different mobile versions is hectic to maintain uniformity.

With such great disadvantages cross-platform came into existence. There is a huge demand for Cross-platform mobile app development in this world of Smartphones and Tablet devices. Intrinsically it creates the inquisitiveness for app developers to know about the best available cross-platform framework for developing mobile applications.

Cross-platform is a type of software that helps to work on different operating systems, such as windows, IOS, and android. This helps to build apps with the flexibility to access multiple habitats. This helps in the development of both types of apps such as

1. Native Apps – the native API’s without having to code differently for each platform this helps in developing unique code that performs on all platforms.

2. Hybrid Apps – The app is coded and then rendered on the smartphone inside an app container which is driven by an internal web browser. Rendering helps in accessing different platforms.

-> Time taken in production is less

-> Cross-platform handling and deployment so handy

-> Programs can be less efficient

Its apps are native apps, which design Uniform UI across the platform or native user interface. Xamarin is open-source software developed by Microsoft-owned San Francisco-based software company founded in May 2011. Over 1.4 million developers are using Xamarin products as of 2017. This integrates with Visual Studio, C#, Microsoft’s IDE for the .NET Framework.

It develops versatility in application building a library of templates, especially leveraging the standard interface elements. It allows developers to reuse the Xamarin Codes across different platforms successfully.

Xamarin released components to work with the backend system, such components are

-> Xamarin.Forms – This system uses XAML. Microsoft has modified this framework to work with the Universal Windows Platform.

-> Xamarin for Visual Studio –  This builds the bases for mobile platforms by integration of technology and customer programs, this support in debugging, developing, deploying of the app with simulator devices.

-> Xamarin.Mac – It is developed by apple technologies in order to develop apple native apps

-> .NET Mobility Scanner – It is a free web-based service that uses Silverlight.

-> RoboVM – Java-based platform which is easy to develop apps.

-> MVC design pattern develops the Mobile/View/Controller pattern which in turn helps in building native user interfaces, which provide guidelines to split the app into core and user interface.

-> Here 90% of the code is reusable and helps in recycling for the development of apps in different platforms hence app development cycle will fast.

-> This allows the use of plugins and supporting APIs so there is better compatibility with hardware.

-> The Xamarin Insight helps to monitor and keep a record of crashes and exceptions. This allows us to build apps with fewer bugs.

-> It is very easy to create device-specific applications over different mobile platforms. As Xamarin helps to develop productive and high-performing code that can access every native API.

-> Platform-specific code needs rewriting some part of the UI in native apps.

Flutter is an open-source UI software development kit developed by Google. A single codebase can develop different platform-related apps. The first version was known as “sky” which ran on the android platform. In 2015 Dark development summit rendered the first version with 120 Frameworks per second. Finally, in December 2019 a stable version of Flutter 1.12 was released.

The framework Architecture of Flutter is

-> Foundation Libraries – these are written in dart to provide classes and functions used to construct applications using Flutter.

-> Same UI and logic in all platforms provide the consistency to save time and effort in building the product.

-> Declarative API for UI building helps to develop 2D-based UI which helps is Time to market speed is increased.

-> Effortless development as customized animations and UI with any complexity is available.

-> Usage of skia helps in Ui built-in Flutter can be launched in any platform.

-> With ready-to-use plugins you can easily implement the os level features.

-> App size is restricted hence developing large apps may lead to removing some of the animations and libraries.

-> Limited set of tools and libraries.

It is an open-source mobile application framework created by Facebook. inc. along with native platform capabilities, developers can develop applications for all platforms. This supports the developers to write the native app code in java for android, objective-c or swift for IOS. From this react native using javascript manipulates the native views to the application form.

React Native doesn’t manipulate the object mode instead it runs in the background with the interpretation of javascript and contacts the native platform via serialization, asynchronous, and batched bridge.

-> NativeBase – This platform along with some javascript functionality with customizable properties helps to build a quick perfect interface. It provides Ui component libraries for React Native and it supports the web from version 2.4.1.

-> Snowflakes – it is an open-source snowflake Hapi Server used to run along with reacting native.

-> Without worry compiling can easily make changes as Hot Reload features are available.

-> Building complex animation and the transition are tedious.

It’s a tactical situation when it comes to choosing one among these. Each one has its own unique configurations in developing applications. One thing that might help is the performance of this software in the present world. 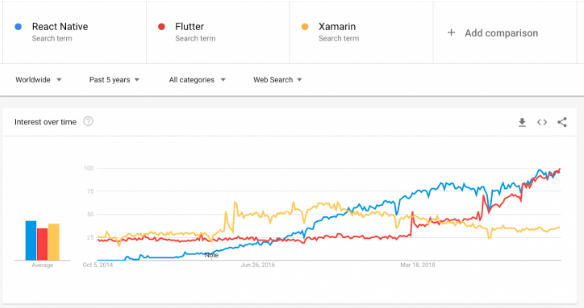 Analysis can visualize that xamarin and React Native is in little hype with developer supporting features. But you still can’t rule out flutter; it has its own configuration to excel.

As you can assume no size can fit everyone, so choose your best-fitted platform based on your own knowledge and capability to build the application.

One piece of advice that might help is keeping pitfalls aside, a software with heavy advantages outweigh would best choice to build an application