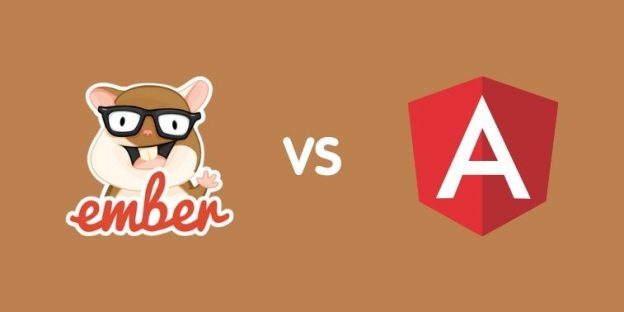 If you are shooting for Single Page Web Apps then the article is tailormade for you. Nowadays app developers are constantly stretching their limits to explore new possibilities and technologies and Javascript is one such technology that is loved by all.

Portals like Gmail, Linkedin, and Apple Music have made SPAs popular and one of the reasons why web app developers like to work with Javascript is the advanced JS-based SPA development frameworks – Ember and Angular JS for front-end web app development.

No doubt app developers find the JS to be the best technology for core coding of affluent apps but when it comes to selecting a dedicated framework to build enterprise-level solutions rather than going through the learning curve, developers prefer relying on the potentials it offers. Also, there are times when even experienced developers find themselves in a dilemma about picking just the right Javascript framework hitting the bull’s eye.

The ultimate aim here is to develop enterprise-level, robust, performing and highly scalable single-page apps with feature-rich UI that can attract and retain potential customers. Because of the purpose, web app developers and or any app development company is the fan of potential frameworks with extensive libraries and tools, eliminating the need to re-write codes, have clean documentation and a supportive developer community.

The article takes you through the similarities and differences between the two robust front-end SPA development frameworks – Ember and AngularJS.

9. Which Framework to Choose? Conclusion

Internet is used by everyone including the audience with visual and motor disabilities. There are several assistive technologies integrated into a site that makes it easier for the specially-abled groups to use and interact with web apps increasing the potential user pool. No matter how prompt are your online business ideas, if your app is not accessible to every kind of user, you are likely to lose business. Solution? Designing a site to be accessible increases the user experience of a business site.

Angular JS is one such highly potent language for building accessible applications with the implementation of proper tools and techniques. For instance, Angular developers exploring the potential of tabindex, role and ARIA can make come up with the best accessibility features for any extensive application using Angular in its core.

On the other hand, Ember has made it super easy for coders to focus on the accessibility factor of the web app by providing proper attributes and provisions to the project. It is really difficult to add attributes in the middle of the coding, ember lets developers can add the attributes at the beginning of the project or can edit the index file later.

Being in business for years, we can say that when it comes to weighing the utilities, the accessibility factor of a web app should be the priority of the app developers.

Testing is a crucial part of web app development which goes simultaneously with the process to assess the quality of the business applications. Whether it’s functional testing or unit testing, the app developers need o write and execute the tests for outcomes to decide further processes.

While working with Ember JS, testing is broadly categorized into two categories:

-> Testing Speed – How fast can the test be executed?

-> App Segment – For which part of the app testing is designed or conducted?

To cover the above two aspects, Ember uses 3 types of tests – unit tests, rendering and application tests. Specifically designed tests help you assess the productivity and accuracy of various components of the application. Rendering tests help you be on your toes since day one making your app an industry-leading solution now and for years to come.

Ember helps app developers to inculcate best practices by writing precise tests to assess the functionality of various components of the app – right from the beginning of the project.

When it comes to testing Ember holds an upper hand over other frameworks because of the below-mentioned benefits:

-> Designing and executing tests like Setup tests to assess controllers.

-> Writing and executing tests for prime components, helpers and relationships for an accurate and efficient framework.

-> Extending the scope of application route and providing a command ember to develop route application.

The top-notch front-end framework for a reason, AngularJS efficiently helps the developers to code and test the product simultaneously with the use of dependency injection to stimulate requests.

Testing was one of the prime aspects kept in mind while writing Angular JS. However, the developers need to explore the possibility in order to make the best out of this potent framework. All in all, it should be the professional app developer who knows the in and out of the framework when it comes to web app development. Angular JS follows a one-file-one module to manage the modules while testing.

The angular framework makes it easier than ever to write abstract documents and modular logic units. Some developers even find it a useful practice to combine unit testing with Angular JS that helps them find the flaws at the very beginning of the app development. Also, the choice of various professional app developers, Angular makes it super easy to test the application by providing prominent application parts also allowing to manipulate various components of the application so that testing is even more conceptualized and implemented.

Not limited to testing, the Angular community clearly understands the scope of an application (that scales and grows with time) and therefore improving code’s orthogonality is not a tough deal to crack for the web app developers or programmers. This is why the AngularJS framework is more prompt to accept changes and updates (solving the scalability factor).

Design and make innovative Single Page Applications as Angular provides a concrete base for testing as well as handles constantly increasing size and complexity of the app as it grows in the market.

Get access to the 12 best node.js frameworks for server-side scripting of the web application.

Components are the building blocks on which an app develops and works. While components are given a widget-based approach in Ember, Angular has a more extensive approach.

With Ember, writing HTML tags is easier than ever because of the Handlebar layout which effectively contributes to writing application-centric HTML tags. Ember JS framework is flexible when it comes to using custom elements to develop a business-oriented web app. Ember gives you the flexibility to split HTML into smaller parts known as components.

As compared to other development frameworks, Ember has gone the extra mile in its offerings. Indeed a great choice for developers, the framework has made it easier to achieve some common tasks. Helper tags like <inputs> and <Textarea> lets the user with some minor tasks. These helpers are used to set up several properties. The component flexibility in Ember helps binding properties dynamically.

As said above, Angular components have an extensive approach than Ember, it is easy to create reusable HTML syntax. The framework helps in using the semantics of the code in a more optimized way ultimately shaping the most accurate and sleek structure of the app codes.

Angular itself is an extensive framework that also provides multiple UI frameworks as a part of the ecosystem letting the developers be more innovative and insightful with their projects. Developers find it effective and time-saving to use existing UI frameworks based on Angular JS. Such frameworks include Mobile Angular UI, Timer, Quantum UI, Tags, etc.

One can certainly put both the high-end frameworks on a pedestal and judge them based on the benefits each gives. Both being the best SPA development frameworks, the app developers have to be contextual while choosing the right framework for app development.

-> The powerful framework for easy and quick web app development.

-> No dependency issue and parallel development.

-> The framework requires less coding and has an extensive ecosystem to develop rich yet sleek applications.

Knowing the potential of frameworks is a must for UI designers and developers to make the entire process of web app development easier and quicker.

Ember is an open-source javascript-based library that helps in developing smart and efficient single-page applications. It is a highly flexible and easy-to-use framework for scripting client-side web applications and is also an excellent deal when it comes to writing code native applications. Completely relying on view to view model, it uses routes, templates, models, controllers and components.

Angular is an app developer’s best bet when it comes to building business-oriented and extensive applications. The framework does not contain any bar or dependencies (jquery or other types of Javascripts) which makes it a potent framework in itself. Thanks to its streamlined routing, the framework makes page navigation easier and quick.

Because of the lightweight directive and high-performance nature, Angular JS is the best framework for building enterprise-level single-page applications like Gmail. If that is not enough, the framework gives easy access to conduct automated testing for applications.

After accessibility, components, advantages, and testing, here comes last but definitely not the least parameter of judgment for Ember vs Angular – The learning curve.

The learning curve for both the frameworks is deep – the major difference developers have found in the two frameworks is while Angular seems to be an easy language at first, Ember gets easier as you progress with your learning phase. If the app developer or programmer is well-versed with either of the frameworks, working with them becomes amazing and efficient.

Adding on to that, Angular is more flexible than Ember – as Ember is dependent and restricted by additional resources. Angular is an extensive framework, so before deciding to go with Angular, make sure you have the best and the professional web app developers by your side.

On the other side, Ember allows web app developers to learn through the strict pattern employing more conventional ways. The framework could be a bit exhausting for beginners and it is difficult to achieve excellence through the framework in the first go.

There are various web financial hits that stand firm on Angular or Ember SPA development frameworks.

Advanced and smart single-page applications like Linked In and Twitch. tv are extensive and scalable and are made using Ember in the core. The potentials of such apps include real-time data transfer, easy upgrades, scalability and a data-centric approach.

Other masterpieces made using Ember – Playstation, Apple Music, and Square.

The highly dynamic single-page application – Gmail is based on Angular JS. It is the leading email platform of the current times. Gmail owns the best application architecture that supports multiple platforms. The best part of the framework is it is capable of decoupling any part of the application logic from the document object model.

Some of the best bets revolving around AngularJS are Netflix, JetBlue, Guardian, IBM and Wikiwand.

Which Framework to Choose? Conclusion

No one can put either of the two frameworks on a pedestal (Angular vs Ember) as each has its own set of advantages and challenges. The app development company often puts the two on the scale and measures them for scalability, performance, dependencies, and complexities. While Ember has more complexities and has a comparatively harder learning curve, it also owns some out-of-the-box functionalities with regard to the specification of web components.

If talked about complexities and scalability, Angular clearly has an edge as developers here have the flexibility to come up with extensive and scalable apps without worrying about the complexities involved.

For a professional app developer or a web app development company, the learning curve is probably not the crucial factor when it comes to decision making. The priority is the other set of utilities and effectiveness a framework shows in context with the nature of the application and the business it serves. For any queries on web app development based on either of the frameworks, discuss with Vervelogic. We are a click away from you.